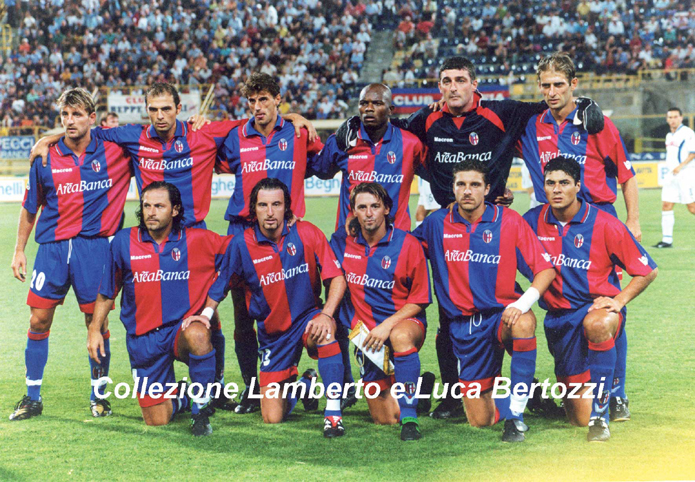 Amarcord: Bologna-Fiorentina some years ago - 28 ott November 9, 2001, at the Dall'Ara Stade in the city of Bologna, the “Apennines Derby” came to scene during the tenth top division championship. A strange and unusual championship was carried on that moment. After nine matches, the Chievo Verona was the leader with 19 points which leaded the Rome, the Milan and the Inter stopped to 15 points and the Bologna with 14 points. The Fiorentina was twelth in the table just 9 points. It was also important to remember that the Guidolin's guys – the best defensive championship – just saved three goals till now and the unbeaten goalkeeper Pagliuca at 336 minutes.

A brief summary of the match

The Bologna started to run very fast but the Manninger blocked carefully the Red-blue action.
In the 12' Macellari made a cutting cross, really active on the left which was diverted by Manninger on Olive' s feet who passed the ball towards Nervo who kicked.
After it, Fresi intervened in few steps from the goal-line and scored by a half scissor-kick. Just three minutes the match lasted, the Fiorentina equalized by a really messy action characterised by Adani and Moretti who in turn inside the small area trying to score but they always found a Red-blue defender willing to return. Following to the umpteeth back trial by a Red-blue defender, Ganz tried to win the ball, scored and equalized. Yet, the Purple players were no satisfied with that goal as the Bologna took the lead. The timekeeper indicated 17 '.

Macellari kicked penalty at three-quarters field and Fresi just alone at few metres from the Fiorentina's goal, shot by heat: 2-1. Yet, the Fiorentina didn't retire its intentions and in the 26', after a combination between Nuno Gomes and Ganz, the goal was passed to Vanoli defender in the Reb-blue box who lobed when Pagliuca was off the goal: 2-2. The goal party went on.

In the 32' , Lamberto Zauli was able to shoot temporarily and definetely the score of 3-2.
Due to Zauli's goal, all Fiorentina objected to a dubious offside of the Red-blue who was alone in front of Manninger after a Purple defender had defeated the shot by Cruz.
After a first time full of great goals, the players didin't shoot during the second time but it was full of great and fantastic feelings.

After some minutes of the match, the referee Pellegrino sent Benin off due to his double booking as he was responsible of a back foul. So the booking was inevitable.
The Florence with only ten players tried to equalize but it wasn't able to manage it beyond some scrimmages in front of Pagliuca.
On the other hand, the Bologna had a field-day to win by k.o. but it was never able to exploit it. In fact, a penalty kicked uppermost towards the stand by Cruz in the 78' which was given it to Cruz as Moretti knocked Cruz down.
Bologna had many occasions thanks to Bellucci and Nervo. As Bellucci , in the 66 ' by a header, saved from few steps and Nervo in the 82' scored the post by an outside box.