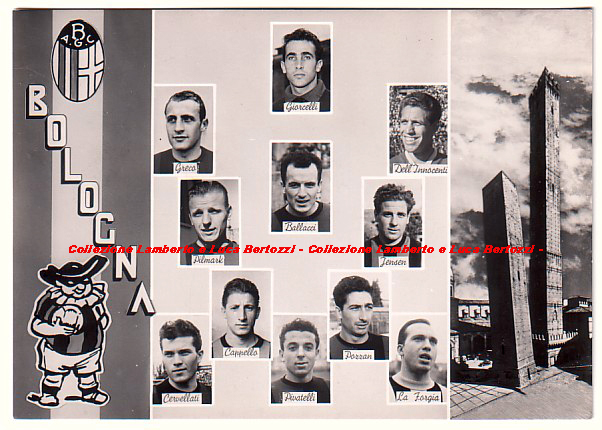 Amarcord Bologna vs Torino some years ago - 20th January On Wednesday, 7th March 1956,  in Bologna it was played the rescheduled time returned because of the snow on 19th February. The two teams fought on a soft ground at the Bologna Town Hall's stadium. Both of them had won in the previous heat - the Bologna, at home, against the Pro Patria 6-1 and the Torino in the derby away match in the host Juventus 2-0.Thought it was a match played in the weekday,quite 25,000 people ran to enjoy themselves it thanks to the nearly spring temperatute,too. The all lead Fiorentina was present during the match, after a sensational win in Milan against the Internazionale (3-1). At 3.15 p.m. when the referee Vincenzo Orlandini from Rome started to play some very important absences in the eleven Torino players were noticed. In fact, Grava, Cuscela, Moltrasio, Antoniotti and Sentimenti III were in the stand.

A SPOT OF PLAY-BY PLAY

At the first time, after whistling the match, the Bologna started to be under pressure the opponents, running all balls, fighting with stubborness and compelling the Torino with breathless  returns. At 13' the Red-blue led. Pivatelli became right wing and went in the penalty and the opponents tried to take the ball away, but he kicked a left and scored at the right in the low corner of the Rigamonti's net at his right: 1-0. At half an hour, Pivatelli doubled again: the Red-blue players bore the ball down and scored with a strong shot with the same way as before (2-0).  Despite the Bologna was leading by two goals, he managed the actions.  Just to notice , Rigamonti  well saved in two times with Pozzani's kick.  The Red blue superiority was interrupted by an undecided Torino's attack. A well Bacci's action was wasted badly by Buhtz with a side kick. The first time ended with the host Bologna led 2-0.

In the second time, the nets doubled. At 47' a Bonifaci's long clean from the Red-blue defensive zone was passed by Pivatelli's head towards  Pascutti, who ambushed in the middle of the Torino zone, kicked with left foot and scored very strong Rigamonti: 3-0. At 55',  just a bit Torino reaction with Bacci who touched the ball by head and sent it to the bottom. Then,  just a  minute the referee Orlandini gave a penalty to the Red-blue due to a  Paduzzi's foul onto Pascutti. Pivatelli was on the spot and first Rigamonti returned the penalty, then he returned the ball and Pivatelli scored it to the bottom. Some minutes passed and at 61' the Bologna scored the fourth goal. In fact, after an exchange between Randon and Pozzan, the ball passed to Pascutti that advanced the Rigamonti goalkeeper and scored it in the low corner. Anyway, the match didn't end! In fact, Pilmark made a cross  pass  from the right to the left, so Pozzan was able to run very fast and scored the fifth goal at 77'. Then, some minutes before the end, the Torino got the  consolation goal by Bacci that kicked a running kick that it was vertically returned by Greco  and scored Giorgelli.

The end of the goals happened just some minutes before the end of the match.  Bonifaci made a really wonderful deep pass towards Pivatelli that headed towards  the net avoiding Rigamonti and scored into the unguarded net : 6-1.

Legend Photo:  The white-black postcard issued by Bromofoto Milano relevant to the Bologna team of the season 1955-1956