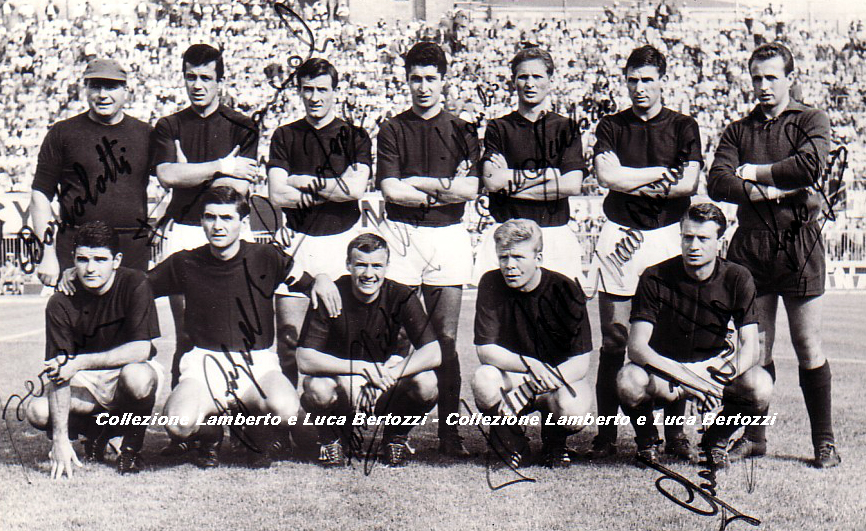 Amarcord: Cagliari vs Bologna some years ago - 27th January On Sunday, 2nd October 1966, the two Red-blue teams, Cagliari vs Bologna, played the third championship of 1966-1967 at the Amsicora stadium in Cagliari.

The previous week,  before the match,  was characterised by a particular  gossip event. In fact, the sports' newspapers had echoed too much about the challenge between the two coaches as in the previous season, the present Cagliari's coach,  Manlio Scopigno, started to train the Bologna. Yet, just before fifth matches he had been sacked and he was replaced by Luis Carmiglia.

Today, after Manlio Scopigno's exemption,  it is the first time the two coaches are competitors with some really different ideas to train. Unfortunately, the Manlio Scopigno's way to play was the best and the Bologna was in difficulty. The Cagliari, after a really enthusiasmatic match played in an excellent and strong way, crushed  totally the Bologna.

Short summary of the play

After wishtling the match, start from the referee Sbardella from Rome, we could see a high speed  match played by the two teams characterised with sudden  reverseals from  side to  side.

At 6' the Cagliari led:  Greatti, who was in the midfield, after stealing the Bulgarelli's ball, passed to Riva and first avoiding Furnalis, fighting back the desperate Janich's tackle. Afterwards, he scored with a great level shot surprising Rado.

The Bologna's reaction was shattered towards the several dangerous away from the Cagliari's goalkeeper Adriano Reginato. Then, the Cagliari failed twice as Nené crossed onto Boninsegna and failed the double.

Afterwards, Harald Nielsen failed the double occasion despite Bulgarelli passed the ball to him. The Danish's kick was returned by Reginato even if hardly.

At 20' the Cagliari doubled. Riva, in the midfield won a fight with Bulgarelli and Greatti that exchanged the ball between them running very fast. Moreover, the Red-blue defence saw him instead of attacking  and Riva from the mid of box scored very strong Rado again. At the second time, the Cagliari was always dangerous while the Bologna was in difficulty.

At 52' the third goal was scored by Riva; the Nené's cross was taken by Greatti who quickly passed it to the midfielder Boninsegna that kicked it and Rado saved it. Yet, he didn't  blocked it so the ball entered the net.

At 3-0, the Bologna was still absent in the play while Riva was getting the Red-blue defenders crazy. The defenders, Furlanis and Ardizzon, marked him very closely, but they didn't succeed in stopping Riva/him.

At 58', Furlanis knocked him down in full penalty zone. Penalty. Riva scored very hard, but not very corner.

The last thirty minutes of the match were characterised by Helmut Haller that was in the search of a confusion goal for the Bologna, but he found Reginato, an unbeatable opponent.  Just 3' before the end, a sudden strong kick by the uncontolled Riva tried to score the third goal. A miracle Franco Janich's save that touched the ball by head in corner.

The Bologna and its coach Carniglia could only “ sing a sad de profundis”! Manlio got his win towards the opponent coach!

Down from the left to the right: Perani, Bulgarelli, Nielsen, Haller, Vastola

On the side: As the Guerin Sportivo illustrated the fight between the two coaches