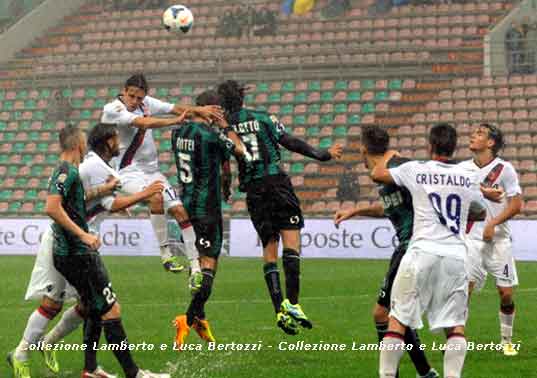 Amarcord: Sassuolo vs Bologna some years ago - 10th March On 20th October, 2013, it's the first time the two teams have played in the Division. It was the eighth round and the match, but unfortunately, stated who would have been the team at the bottom of the table.

The Red-blue team predominated the match from the first to the last minute ( 61% possession), but when the referee whistled three times the end of the match, it was defeated for 2-1.

Therefore, the Sassuolo reached its first historical win in Division by winning the Emilian derby and letting the Black-green fresher to withdraw the bottom of the table. So,the Bologna was at the bottom of  it and it was defeated for the fifth time,too. It was the worst birthday gift for the Red-blue coach Pioli who turned 48 years old.

At the marsh Mapei Stadium, in the Noah's Flood, the Sassuolo played cautiously while the Bologna tried immediately to reach the edge of the opponent penalty box. So, Diamanti had a good opportunity to kick by penalty, his speciality, and  led the Red-blue. Yet, the shot ended over the crossbar!

At 12', the Sassuolo was led by its offensive action: Berardi won the tackle with Natali, he entered the box where Mantovani tackled him in an irregular way according to the referee. Penalty. Berardi himself scored and caught Curci on the top.

Bologna tried to fight back, but just after 6', the Sassuolo doubled. Floro Flores, taking advantage of a slow back pass, ran and kicked, from twenty metres, a level shot by his right foot that Krhin deflected and misled Curci, who was really surprised and he didn't save it. The ball arrived at the small corner of the box. The Bologna ran bravely to the opponent box; lots of actions were played in front of Pegolo, so just one goal.

At 34', a scrimmage happened by Diamanti's throw in which Rossini, trying to anticipate Natali, pulled one's opponent and touched the ball by his own arm. Damato gave the penalty to Bologna and Diamanti kicked very strong and scored it in the high corner. Just before the end of the first time, the Red-blue became very dangerous again with shots to the goal: In fact, Natali touched high header, Cristaldo kicked, Pegolo saved and Diamanti kicked the ball but it was just a bit out. At the second time, the Bologna, in a pouring rain and marsh field, came close to equalizing immediately by Kone who dribbled Longhi and kicked with his left foot, but he angled too much. So, the ball  touched the goalpoast. The two teams had some difficulties to stand in the field and to have the same play occasions.

The Sassuolo, by counter-attack, wasted two opportunities by Laribi and Floro Flores who let Curci  rendeem himself and, he was good at saving the goal.

The match was played by the Bologna, but Pegolo seemed to be unbeatable. The field was unplayable, but the Bologna was able to do lots of opportunities in order to equalize at least.

At 71', Acquafresca, header, deflected to the small corner of the goal, but the water slowed down his kick and Pegolo saved.  At 73', Cech, alone in front of Pegolo, hesitated and let Antei free the defeated goalkeeper. At 74', Diamanti crossed  the goal and a Pegolo's twist of the back let the ball send in the corner. At 89', Cristaldo had a delicious ball at the high of the penalty shot, but he had the defenders pulled back in the corner. At 93', Cristaldo kicked from the high corner of the box in semi scissor-kick again and sent the ball over the goal in the high corner.

In the last action, Diamanti crossed perfectly to Bianchi who had a fab ball , he touched header from 1 metre from the goal, but failed the defection and the ball ended out.