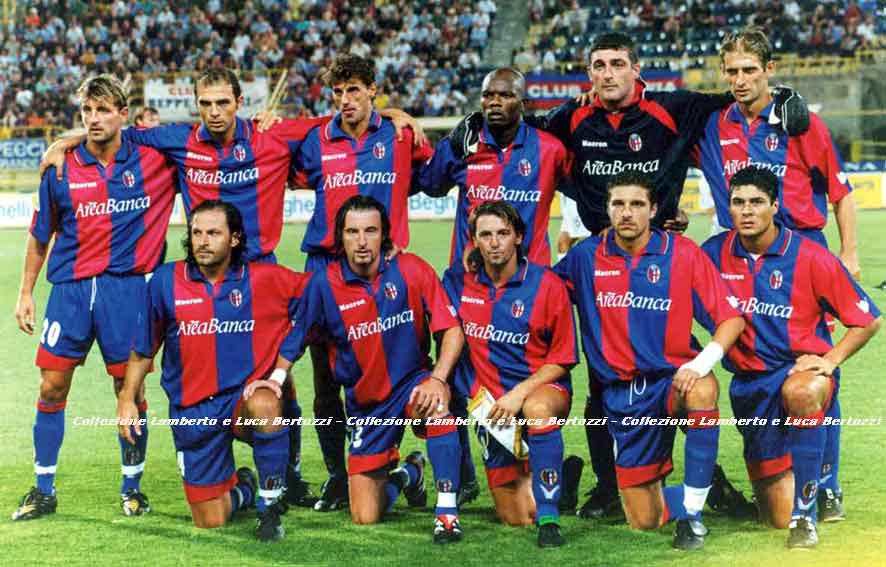 Amarcord: Bologna vs Chievo Verona some years ago - 17th March THE REVELATION DERBY OF THE CHAMPIONSHIP

On 20th January, 2002, it's the first time the Bologna and Chievo Verona have played in the Division  at the stadium full of 20,000 fans. The sports' newspapers had called it as “ the revelation derby of the championship”. Moreover,  the referee Pierluigi Collina who was born in Bologna but took part of  The Italian Referee Association called  “A.I.A.”, was chosen among the gotha referees for that important match. Just to notice,  Francesco Guidolin celebrated his fiftieth coach's box in the professional foootball.

The match was characterised by the Chievo who played fast and the Bologna fought back by a midfield that gave no quarter. Moreover, the Bologna played with a new game plan in which Zauli was a dummy midfielder and Cruz played left-wing.

The referee whistled the start of the play and the Bologna scored by Carlo Nervo, but immediately Collina overruled due to the Red-blue's foul against the goalkeeper Lupatelli on the break.The two coaches got worked up over their coach's boxes, so after the umpteeth complaint, the referee Collina  reprimanded Guidolin.

The Chievo predominated, little by little, the play in the field and while it was mastering it and all were waiting for leading at any time, the Bologna scored at last! A mistake made by the Chievo defence in the defensive left zone. In fact, Lanna touched header backward and Cruz seized the ball and ran along the left sideline, a perfect cross, Pecchia put it on and Zauli scored to the first goalpost at 40'.

The Bologna led sensationally, but the Chievo,just after 4 minutes, could equalize. In fact, Gamberini held Cossato, clear foul but useless as Collina gave a penalty immediately. Manfredini was on the shot and kicked straightaway, but the ball ended against the high corner. Then, in the field again. At the second time, we were aware of a big deal of tension among the Chievo's players.  After a save, along the goal-line by a Chievo's defender who touched header near Cruz, it happened a wicked deed. In fact, D'Anna tackled Cruz with violence at 57', Julio was stretchered away in order to receive treatment like that and  D'anna was sent him off.  Could we say the match had ended as the Bologna was leading one goal with a more player? Not at all!

At 70', Zauli kicked a delicious ball to Cruz who dribbled Lupatelli on the break and doubled.  Yet, the Chievo didn't give up and just after 3 minutes it scored the net!  It was the first goal by Beghetto in Division: 2-1. Therefore, the Bologna started to manage the ball in order to wrap the win up. The match was about to end with no emotion, but at 90' the fourth referee showed the added time board: 5' more.

The Red-blue fans protested and started to be afraid of a possible Chievo's comeback. Yet, during the long added time didn't happen anything interesting on before the referee whistled the end of the match. The classical Red-blue counter-attack ended with a fab Zauli's goal.

Bologna vs Chievo 3-1 with Lamberto Zauli, the best match player.

Opening:The Bologna team 2001-2002 -  Up from the left to the right: Locatelli, Falcone, Nervo, Wome, Pagliuca, Castellini

Down from the left to the right: Olive, Macellari, Signori, Brioschi, Cruz