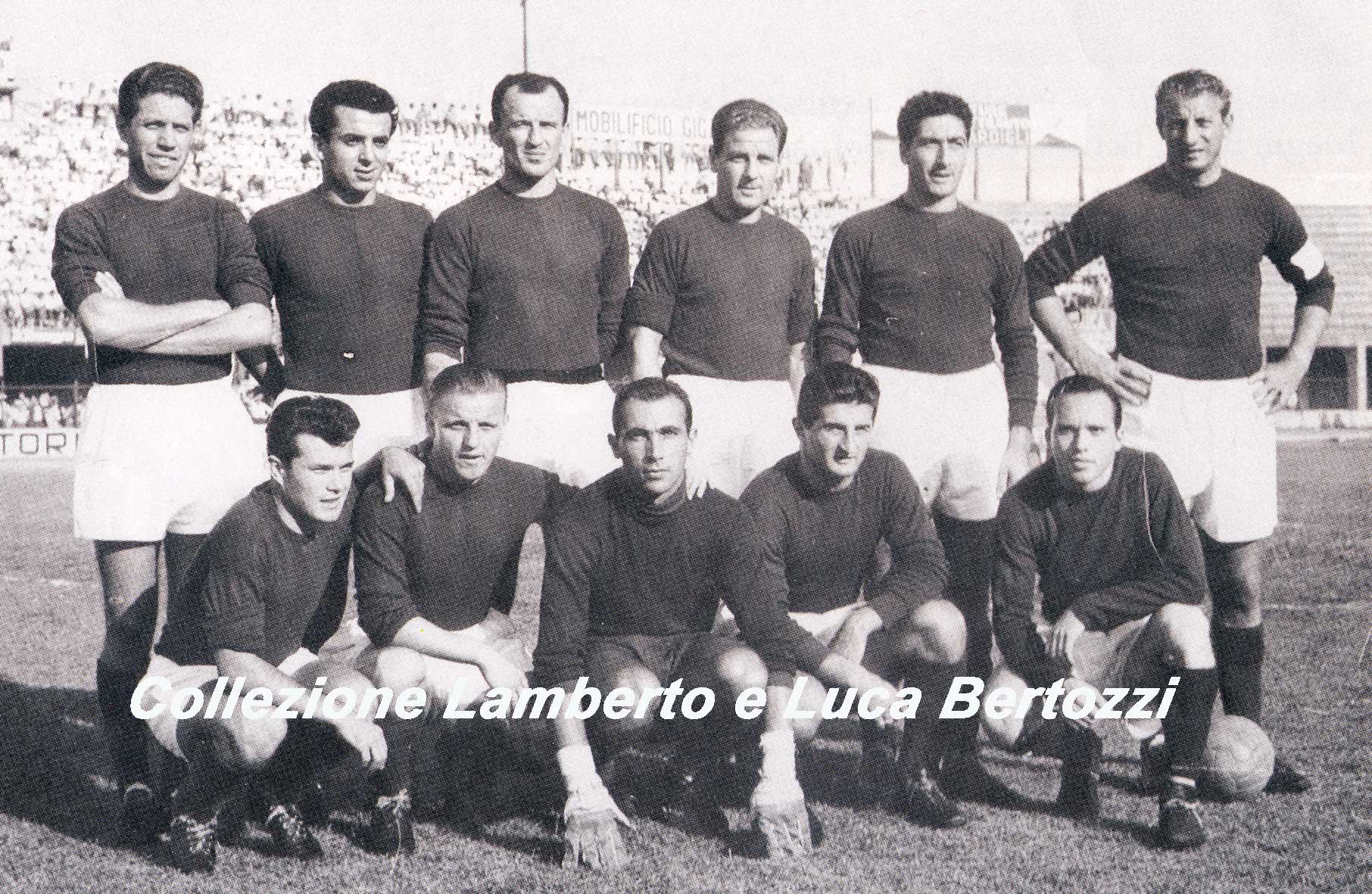 Amarcord: Fiorentina vs Bologna some years ago – 31 March The Bologna fights back the future Italian Champions

March 11, 1956,  it was played the classical match called “top-bottom of the table” in front of 50,000 fans,which 5,000 came from Bologna, at the Town Hall's stadium in Florence. It was a bitter cold day! The host Fiorentina was predominating the championship and it was in good conditions to win its first title of Italian Champions. On the other hand, the Bologna with its best chairman Dall'Ara was toiling up the second bottom of the table and it threatened the relegation.

The feast day was characterised by a very strange weather. In fact, an hour before whistling the start  of the play, the snow was falling heavily over Florence. Then, suddenly a strong wind blew which  it had swept away all the clouds and a pale sun-ray appeared. So, the tramontana was being liked the protagonist of that match as it would have disturbed the players during all the match.

The match was refereed by the best Italian referee of that moment: Cesare Jonni from Macerata. You should wait for seeing the first real action just only 11'! In fact, Orzan and Cervato upset each other, so they let Pascutti head straight the net from a dozen of metres from the Fiorentina's goal and Ezio kicked but his ball ended out just a bit the goal post. The Fiorentina, which escaped by the skin of its teeth, reduced the times to carry out a counteroffensive which resulted in two big actions.

At 18',  a super Julinho's solo with a strong kick outside the box, but Giorcelli was on the path of the kick and he could stop the ball by a great security. At 20', another Julinho's action! The purple north wing gave a fab pass to Virgili who ran very fast towards the net, but even in that occasion Giorcelli received the ovation by the crowd and he was able to save an awkward situation doing a corageous and quick coming out as an avalanche!

The all Fiorentina was in the Red-blue's midfield and ran with determination, but few results! On the other hand, the Bologna reacted to that pressing by leading Pozzan and Randon in the defensive role. Moreover, it defended itself quite letting just few free ways to the opponent forwards. It was necessary to wait for 40' in order to see another purple outstanding performance. A quick exchange between Prini and Gratton, the ball passed to Virgili who was ready to end the action by a fab running deviation/running kick.Yet, Giorcelli was really canny and neutralized the menace by diving.

There was tension in the field and some sharpness happened. The quick Montuori was brought down by Dino Ballacci in a clear way, so the referee yellow-carded the Red-blue defender. The Red-blue defence didn't give up and it was able to finish the first time in a draw. In the second time, the Bologna was more corageous and more pugnacious. Yet, the Fiorentina had the first occasion to score. At 47', by a fantastic Prini's pass, Virgili avoided the Greco's marking who entered alone in the Red-blue's box to send, then, out the goal a fantastic ball. At 52', the Bologna wasted a clear goal opportunity. Bonifaci and Pilmark exchanged each other before passing the ball to Pozzan's box. The Red-blue midfielder wasted all by kicking the ball over the crossbar. At 57', an assist  between Virgili and Julinho granted Montuori to kick a sure  stroke, but Giorcelli, as fit as a fiddle, stopped the ball by a fantastic flying grapple.

The Bolognese team attacked immediately at 60'. In fact, Randon crossed to La Forgia who was free among a couple of the purple defenders, so he kicked very strong the net from just a few stone's throw. The purple goalkeeper cleared it open-handed and Pilmark rushed at the ball, but he kicked over the crossbar.

There was still 30 minutes to end up the match and the Bologna and the Fiorentina would rather not have run a big risk as it always happened such a kind of match. The Red-blue coach Campatelli reinforced the defence in order to carry the tie out.On the other hand, Bernardini forbade any kind of attack to his players even thought he didn't give up any win.

Just a minute before the end of the match, the tie was brought into discussion. It was all thanks to Pivatelli's own action, who suddenly kicked very strong towards the net. The purple goalkeeper Toros saved the ball and the result by diving himself. So, that tie let the Fiorentina increase his  lead  against the Milan, second of the table, and the Bologna to start its rush towards the final

Closing: The postcard that celebrated the Fiorentina as Italian Champion