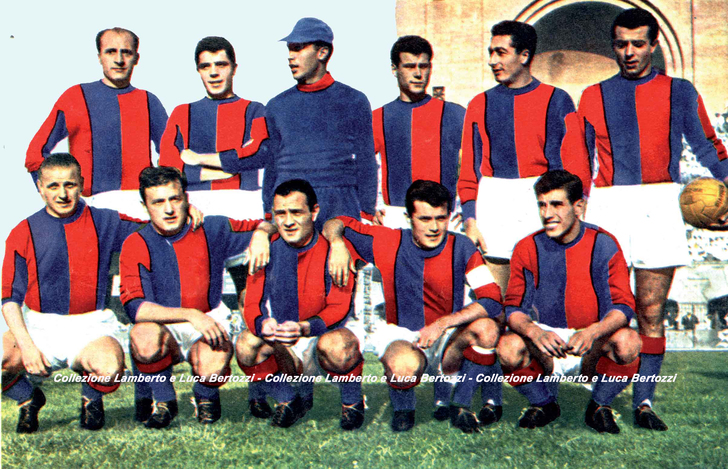 Amarcord: Bologna vs Udinese some years ago – 28 April A whirligig of goals

June 2, 1957, it was played the 32nd championship day, there were two matches to the end and the first three positions on the table had already been assigned. On the other hand, there were six teams, the Sampdoria, the Udinese, the Internazionale, the Torino, the Roma and the Bologna for the fourth place of the table.

In a muggy day, at the Local Town Hall's stadium, the Bologna, in front of 14,000 people, overpassed the minimun goals gap the Udinese team that, at the second time, should probably end the match with a really wide goals margin. Yet, the Red-blue's coach Campatelli, when his team led with three goals, commanded to his midfielders, Pozzan and Gasperi, to help the defenders. Unfortunately, this game plan aided the White-black players in the second half which they became minacious and,at first,tried to short the distances, then, to come close to a tie.

The Bologna was being liked the protagonist in the first minutes of the match and it attacked while the guests had to defend themselves in front of their box. The match was played very fast and fab.

At 5', Cervellati received a cross by Bonifaci and scored promptly the net. Cudicini was ready at the diving save; suddenly, the Udinese reattacked and led at last. Ballacci fouled at the edge of the box. Penalty. Lindskog, while the Red-blue's defenders stopped to complain about it, took a shot at a goal  that surprised the goalkeeper Giorcelli.

After the net made by “the small zebras”, nickname of the Udinese, the Bologna started a suffocating forcing let his forwards carry out a plethora of very dangerous shots really controlled by Cudicini. The most dangerous shot happened at 23' when Cervellati, by a clear header, sent to the net, but Cudicini wa able to brush the ball that ended against the crossbar.

After 3 minutes, here was the Red-blue's tie. In fact, Pascutti ran after the ball that seemed outside the goal. He took it, dribbled his scorer Baccari, then he scored Cudicini coming out. The tie thrilled the host who also stuck with great energy. At 36' Pozzan took a penalty passing a delicious ball on Bonantini's head who scored 2-1 for the Bologna. At the second time, the Bologna already seemed more self-confident. At 48' Bonafin,who was passed by Cervellati, scored the net by a level shot: 3-1. At 66' Pozzan entered the box, dummied a shot, then passed the ball to his left to Pascutti who, as a lightning, seized the ball and shot it from few steps. Bologna vs Udinese 4-1.

All thought that the Bologna could score a plethora of goals, but at this point, here was the changement of the game plan wanted by the Red-blue coach Campatelli described as before. So, the Udinese took advantage of it in order to attack with great decision. In fact, just only 8 minutes, at 69' and 77', it had scored twice by its forward Giuseppe Secchi who dribbled, both times, the defenders easily.

13' before the end of the play, the match was reopened. The Red-blue players showed a physical and emotional tiredness. On the other hand, the Udinese seemed stronger and more efficient.

At 82' we saw a lengthy scrimmage in the Red-blue's box. In fact, three Udinese forwards' shots were luckly cleared by the Red-blue defenders.

When the referee Bonetto whistled three times the end of the match, both the Red-blue fans and players were really comforted by it. Even if the Bologna won the straight fight, it would end the championship at the fifth place of the table just one point from the Udinese which was fourth.