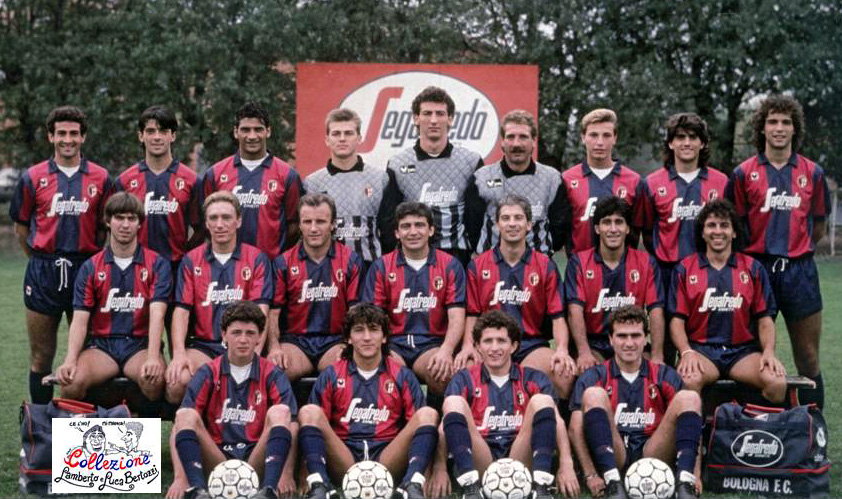 Amarcord: Bologna vs Juventus some years ago – 26 May After some minutes how to play by the part of both two teams, the match started to come into play.

At 15' Barros taking advandage of a wonderful Alboletti's assist, scored the net by a delicious lob.

1' filled and the guests claimed a zero penalty as Cusin fouled Marocchi in the box.The referee didn't grant the maximum penalty and whistled a penalty outside the box.

At 22' Maifredi did a replacement that unbalanced dangerously his team – Lorenzo as attacker on the ground and De Marchi defender off the ground -. Thanks to this manoeuvre, the Bologna tried to equalize. At 31' Tacconi had to save the box from Bonini's and Monza's attacks.

The Red-blue's players were favourite by Pecci's and Poli's brainwaves, so they put under pressure the Juventus. Some critical situations had been created in the White-black box without reaching the hoped goal.

After the end of the Bologna attack with anger, the Juventus headed the play by a counter-attack. First of all, a Marrochi's attack at 37' but it was unsuccessful as Barros arrived late; then, the second goal for the guest at 42'. It was Zavarov to do everything, playing at high levels and he crossed Altobelli that headed and scored the goal to Cusin. At the end of the first time, the Juventus led for 2-0. During the half-time, there was the second replacement in the Bologna team – Alessio replaced Stringara -. The Bologna had already been off  balance in the attack and it tried to move up  with difficulty. In the second time, just after 7', the Juventus scored the third goal. The Portuguese Rui Barros, after an exchange at half field, he ran half-back and, just entered the box, he ended the action by a lob that, at first, touched the goalpost, then beat the ball to Demol and ended at the bottom of the net.

At 63', Tricella knocked Marronaro down in the box, so the referee Magni whistled the penalty. Marronaro himself was on the spot and Tacconi dived the ball, he deflected the Red-blue wing shot by an excellent performance, so he saved the result. After 3', Poli opened the match again and turned an easy Pecci's pass, by an accurate blow, to 1-3. 9' filled and Zavarov, by penalty, passed to Laudrup that was alone in front of Cusin; he touched softly the ball and scored 4-1.

At this moment, nobody would have bet that the Bologna was able to pull back. Moreover, nobody would have thought that the Juventus defence could have lived a difficult moment. In fact, Tricella and De Agostini were at sea from the Red-blue displacements as they played with two midfielders and four wingers. It was Alessio, an ex-Juventus player, to benefit from the scanty Juventus concentration by a couple of goals.

At 81', after a wonderful run towards the goal, Poli crossed towards the White-black midbox. Lorenzo play-acted to Alessio that after received the ball , he sent it by a strong diagonal pass to the bottom of the net guarded by Tacconi. Bologna vs Juventus 2-4.

2' before the end of the match, Fabio Poli passed to Alessio who, at the edge of the box, made no scruple to score the ex-team-mate.

While the referee was about to whistle the end, Renato Villa, by an unlike stunt, tried to equalize but it was useless.

Down from the left to the right:Neri, Bonetti, Poli, Monza