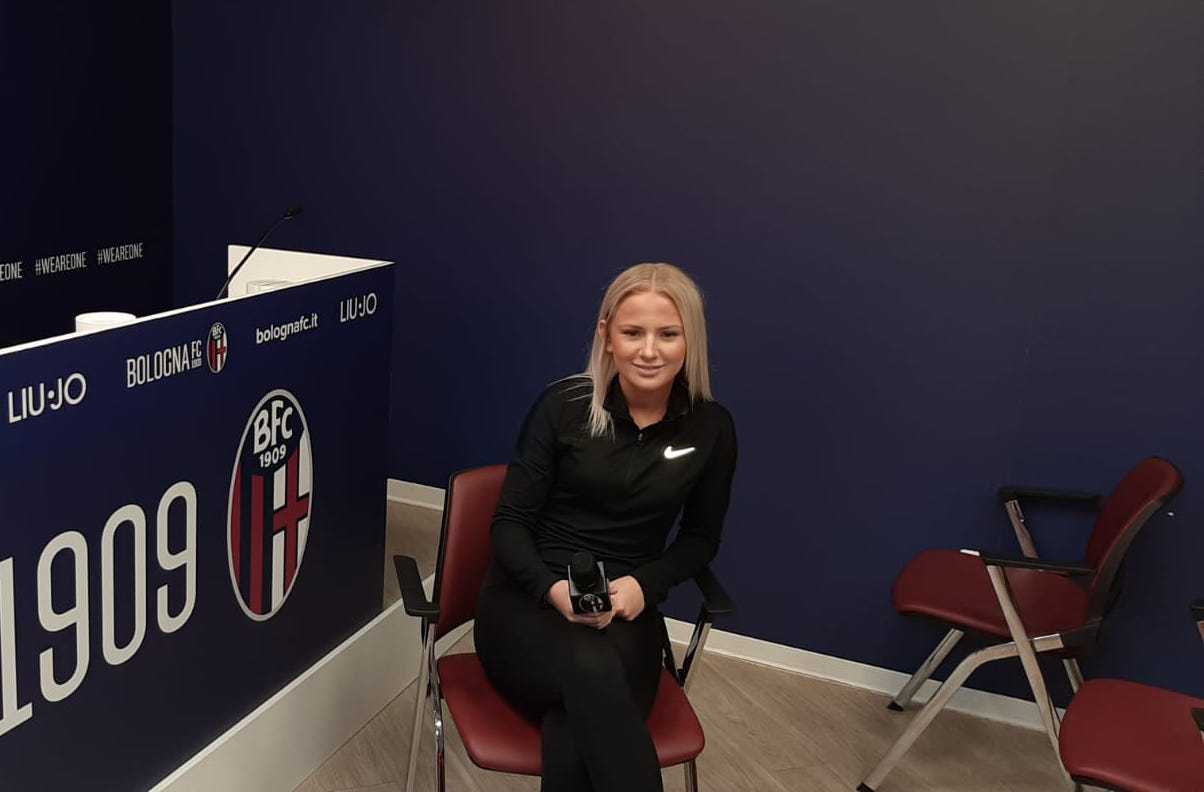 Yesterday, Alice Magnusson was in Casteldebole for a video presentation edited by Bologna FC, but in the late morning we had already asked her some questions, to try to know her better, talking a bit about how she feels here in Bologna, about his relationship with Mattias Svanberg, and about her passion for soccer.
And here we are.

Let's start with a banal question. Do you like live in Bologna? What do you like most of out city?

«Yes i like it very much, its not to big and not to small, i found it perfect for us! Very good food, resturants, culture... and also much better weather here then we have in Sweden!
I could not imagine living in a better city right now, both me and Mattias can play soccer and still live together».

How do you an Mattina meet? Does you common passion for soccer have anything ti do with It?

«We went to school together when we were kids, around 12 years old. We have always been seeing eachother with common friends and went to eachothers soccer games, and for 3 years ago we started seeing eachother for real as girlfriend and boyfriend.
I dont think that soccer ”brought” us together but of course it has been a big part of our lives,and still are in our realtionship. Its an advantage That we can practice together, watch soccer games, and suport eachother. For now it is very important for both of us».

How did you passion for soccer start?

«I have played since i was 4 years old. My big brother played soccer as well and even my mom and dad has also played. So for me it was natural to also start playing».

Is there a footballer you are inspired by or who has passionate you by mailing you chiose to play soccer?

«I have always thought that Marta has been a big insperation, and looked up to her since i was a child. Of course Mattias is a big inspire for me, because i always thought he is so good in playing soccer.
But except for them i dont have an special role model actually.
It think Zlatan is very good and i liked him a lot when i was little, but now i dont follow him that much».

You are a midfilder, but in wich area exactly do you prefer to play and what are your skills?

«I have always played on the wing, either wing back or in front of the back. Actually i’ve never played as the “number 10”, infront of the midfielder, but here in Bologna i do that, and i like it.
My skills are my sight for the game, my speed, tecnical and likes to play fast and simple».

Surely you will followed your new team. What do you think of the current ranking situation of ASD Bologna FC 1909?

«I think that we can do better actually. I think that we are very good team and all of the players has so good qualitys. We need to work harder and not give up, then I think that the last 10 games will go great».

You are young, but you have made a good numbers of appearences in the two Major series of Swedish soccer and this make you One of the most expert player in Bologna women. Do you think you can help your new teammate someway?

« I have a lot of knowlege from my years as soccer player, its just a bit hard to explain my thoughts when i dont speak the language very well . Yes, i think i can help the team. To push forward, making good Numbers and to have fun. It would be a bit easier if i could speak italian, but I’m getting there, i have went to italian classes and hope to soon speak good Italian. I learn new words every day».