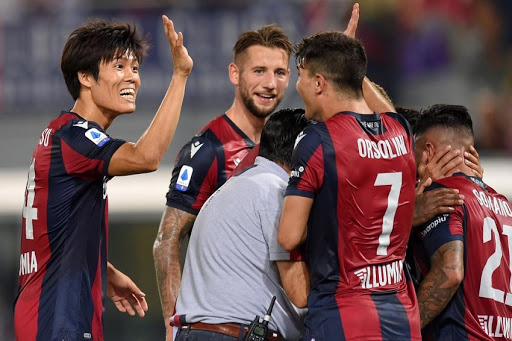 Radio Casteldebole weekly - The resuming of the serie A is hanging by a thread. Orsolini and Tomiyasu will stay in Bologna

Exactly when the resume of the championship was seeming to be closer, yesterday, after a meeting at the Lega Calcio the situation appeared to be very messy. The majority of the serie A clubs have contested the F.I.G.C.'s protocol, particularly in which concerns the responsability of the football team's doctor and the fact that with just one positive player to the Covid-19, the whole team will be quarantined, complicating this way the end of the championship. This opinion is shared by the A.I.C., the Italian Footballer's Association, which has declared that the majority of the players are against the resume of the championship until there won't be a specific day and a protocol concerning the restarting of the matches, since right now the only protocol that has been drafted concerns only the collective workouts. It appears that, in such a difficult moment, the meeting between Gabriele Gravina, the F.I.G.C.'s president, Paolo Dal Pino, the Lega Calcio's president and Giuseppe Conte, the Italian Prime Minister will be the only chance to clarify this situation and answers all the questions that have been made.

In the last few hours Bologna F.C. has also canceled the reservation at the Savoia Hotel Regency that was chosen for the collective workouts that would have led to the 13th of June, the date that was chosen to restart the seria A, even if the government still didn't express himself on the matter. Almost the entire squad is now back at the Niccolò Galli, except Danilo and Baldursson who are respecting their quarantine since they just came back from Brazil and Iceland, Roberto Soriano who went back to Genova to assist her wife during her pregnancy and Nicola Sansone and Rodrigo Palacio who prefer to train at home.

In the meanwhile, Bologna F.C. has declared that Takehiro Tomiyasu wont' leave Bologna. The player was sought by A.S. Roma, but Walter Sabatini has declared that his value amounts at least at 25 million of euros. Same thing for Riccardo Orsolini, his agent Donato Di Campli has admitted that Riccardo is appreciated by many societies but he will stay in Bologna where he knows he can play and deserve a call from Roberto Mancini for Euro2021.