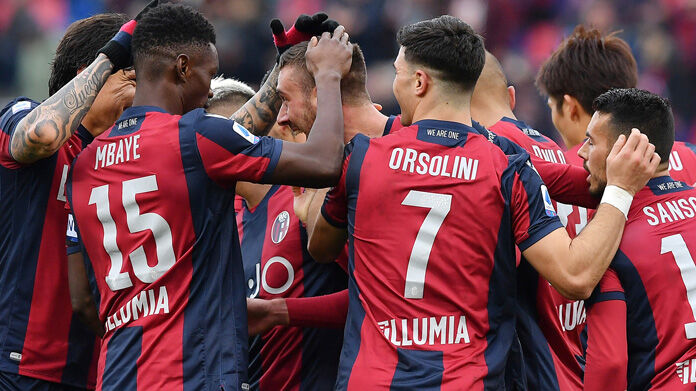 The squad after a goal Calcio News 24

Radio Casteldebole weekly - Bologna-Juventus, almost there. Mihajlović and Bologna FC together until 2023; Skov Olsen out for a month The match against Juventus is getting everyday closer and the squad is training very hard to get back in shape. Siniša Mihajlović wants his team to be focused on the main objective: reach the Europa League or at least trying to do so. It won't be easy since there are many matches in quick succession, almost every three days and the fact that the footballers haven't got the chance to workout in an adequate way during the lockdown may compromise the initial plans.

In the meantime, Mister Mihajlović has decided to pursue his adventure with Bologna FC, renewing his contract with the "rossoblu" until 2023.

The starting XI that will probably face Juventus will be: Skorupski; Tomiyasu, Danilo, Denswil (since Bani is disqualified) and Dijks (who has completely recovered from the injury) on the defensive line; Poli and probably Medel (since Schouten is disqualified, there are chances also for Dominguez and Svanberg); Orsolini, Soriano, Sansone and Barrow will be the forwards, with Rodrigo Palacio that could play on the second half, considering the high amount of games planned. Unfortunately Andreas Skov Olsen is the first player injured: he won't be available at least for four weeks, we can almost say that his season has ended already, which is very unfortunate since this way there isn't a substitute to Orsolini. The new rule concerning the changes (each team will be allowed to do five of them) and the high possibility of injures will be a great chance for those players who haven't played a lot or for the youngest ones (like Juwara, Baldursson and Cangiano) to show off.

It won't be an easy game at all: even if Juventus doesn't seem in shape, in Maurizio Sarri's team there are players like Ronaldo, Dybala, Higuain, Douglas Costa and Pjanić who could solve the match anytime. On the other hand Alex Sandro and Sami Khedira are injured and won't be able to play almost until the end of the championship.

There is a small chance and Bologna's footballers will do their best to take it.