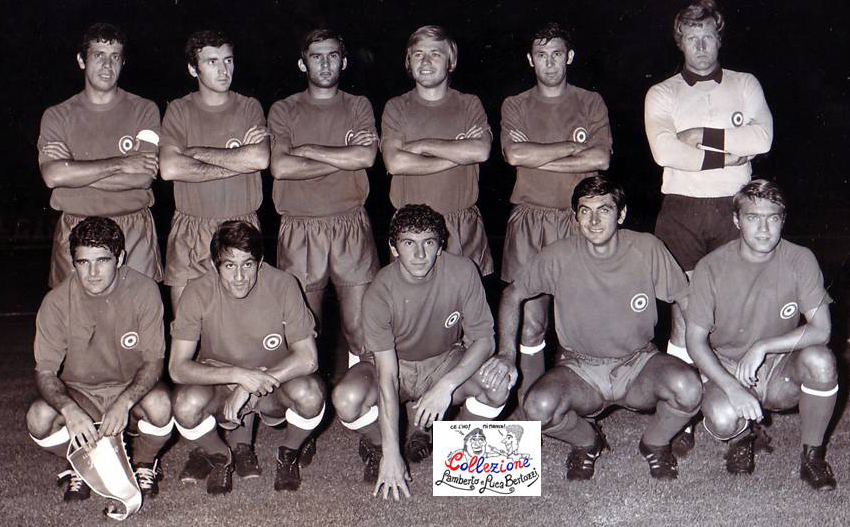 Amarcord: Milan vs Bologna some years ago – 20 May THE ONLY APPEARANCE OF LIGUORI AT THE SAN SIRO STADIUM

Short summary of the play

After some minutes how to play by the part of both two teams, the Red-black's players started becoming really dangerous at 5' thanks to Prati, who after a fast run exchange between Combin and himself, shot violently towards the net sending the ball just few metres from the goalpost. On the other hand, the Bologna had replied with two shots  by Pace and Savoldi.

Just few minutes later, the Red-blue's goalkeeper Vavassori came out with courage on Combin's feet who had launched to the net. At 12' a goal ball for the Milan. Prati's action who crossed to Rognoni's head who passed to Benetti, who freed from marking in the box, shot strongly but ended above the crossbar.

3' filled and an irremediable accident happened. The Red-blue's half-back  Liguori  was knocked down. Romeo Benetti was the guilty who, by a very bad tackle in the midfield, knocked the Red-blue's player out without being yellow-carded by the referee Mario Bernardis that it seemed out of shape. Liguori was really injured to his right knee with a very serious wound. Liguori was stretched away to the dressing room and he was replaced by Perani. So, according to this bad accident, the Bologna was damaged by one of its mainstay when the result was nil-nil and the match was very balanced.

The Bologna was really blocked inside the mind due to the Liguori loss and it let the Milan take the lead that it was only interrupted by a Savoldi's shot saved promptly by Cudicini. At 20' the Red-black team led. Cresci fouled Benetti and penalty for the Red-black team: Rivera crossed the ball to the penalty box. Cresci and Prati contended it and the Milan player was able to brush it with  his chin, quite on the goal line and to strike a blow. Cresci and Janich were remostrating about it as Prati would have helped by his hand.

The Red-black team led and  went on attacking. The Vavassori's goal was rushed, but the “old Vava“ had no Combin's scissor-kick caught and he replied to him by a fab save. At 29' Prati, offside, smashed the crossbar. The Milan pressure decreased and the Bologna brought the match to life, threatened very close Cudicini by Savoldi at 35',  Bulgarelli and Rizzo at 36'. At 41' Rognoni fouled Roversi in the penalty box. The blonde Red-blue defender objected and called on a penalty, but he got just a booking!

The second time started with a bossy Bologna: Savoldi came close to the equalizer  the kick-off, then a Rizzo's penalty that brushed the crossbar at 48'. Afterwards, Benetti  fouled  badly Bulgarelli and he was yellow-carded by the referee Bernardis. At 56' the Milan doubled thanks to Prini's mistake. Rivera did an own action that it was interrupted by the defender who touched back to Vavassori. The pass was too long for the goalkeeper, so Rognoni, took advantage of it by lurking in order to seize the ball and scored the net. The Red-blue's players were no demoralized and attacked with anger.

It was an alarming bell for Cudicini who, after 3', capitulated. The captain Bulgarelli passed to Savoldi that took delivery of it. It was an exchange between Bulgarelli and Savoldi who entered the box and scored a strong level shot. It was an exciting goal: Milan vs Bologna 2-1.

The Milan was in a spot due to the Bologna attacks more and more pressing. At 87', there was the last quiver for Cudicini: Maldera saved in extremis following the Fedele's shot. The match really ended at this point.

Just to report it, the referee Mario Bernardis from Trieste, made the match very tense by his performance under the lines. In fact, at the end of the match, the referee had wistled 56 fouls for the host and just only 16 ones for the Bologna.

Closing: Francesco Liguori was stretched away to the dressing room . Please note the wounds in the right leg made by Benetti's action.